My list of accomplishments may look short, but it's not bad for less than three days of work, right?

Click here to check out
The Indie Video Game Developers Association!
Posted by Michael Henson at 10:24 PM No comments:

Email ThisBlogThis!Share to TwitterShare to FacebookShare to Pinterest
Labels: progress

The Next Iteration of the Inventory Screen

Look!  Power Tokens are now being dispensed by the token generator and showing up in the player's inventory. 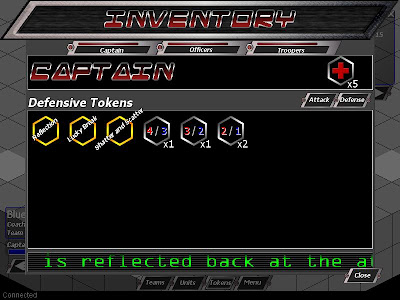 Posted by Michael Henson at 9:48 AM No comments:

I've been meaning to start a FAQ for this project for quite some time, but now that some questions have genuinely become "frequently asked", I suppose now is a good time to do it.

Before I begin, I want to remind everyone that several of the most frequently asked questions have already been answered in a previous post titled Chris Taylor's Common Questions, though some of the minor details have changed, at least for the alpha version.

What kind of game is it?
I categorize it as a turn-based strategy game.  Players taking turns each control a team of units to whom they issue commands that are carried out right away.

Where did you get the idea for this game?
My friends and I used to play a board game called Star Wars: Epic Duels.  It was a super fun, brilliantly designed game whose spirit I wanted to capture in the form of a computer game.  Though there are many differences between Epic Duels and Team Laser Combat, the key difference is that TLC lets you build the team yourself and upgrade your characters' attributes.

Are you going to sell it?
Probably not.  I'll certainly be giving the alpha and beta versions away for free because I'll want as many testers as I can possible get.  After that...well, I guess I'll just have to see how the finished product turns out. If a publisher were to approach me between now and the end of beta, I would certainly entertain the possibility of a publishing deal.

Are you doing this all by yourself?
Pretty much.  I have accepted a little bit of art help from Kristen Miguel, music from Justin Begalka, animation from Shaun Hager, voiceover help from Karina Martin-Moore, game design input from several of my fellow game designers (Ross Story, Dave Fulton, Justin Begalka, Sarah Kemper, and others), but the software design and programming is all me, 100%.

Where's the website?
There isn't one yet, but I assure you that there will be.  I will create the site and then link to it from MichaelJHenson.info in the same way that the CornShark website does now.

Those graphics in the screen shots -- is that really how the game is going to look?
Oh my, no!  Those are just placeholders while I get the code working.  Very little of what you see in the current screen shots is going to be in the final version.  It'll all be replaced with something much more beautiful.

When can we play it?
The target date for alpha release is June 2012.  I will send out a call for testers at that time.  If you're interested in participating in the testing effort (and getting your name in the credits), email me at arachnojava@gmail.com.  I will also be reaching out to my Twitter followers to ask for volunteers, so follow @arachnojava on Twitter to receive updates.

Does anybody actually read this blog?
Yes. You're reading it right now. How do you think these questions become "frequently asked"?  The blog currently has almost 1,300 page views.  That's not a lot given its age, of course, but my own page views aren't counted, so those are all from other people coming to visit.  Honestly, though, the primary purpose of this blog is to serve as a project journal for myself and anyone interested in the project. The fact that it's also a communication channel to potential players is really a fringe benefit.

How does the combat system work?
You move your units around the map by using the Move command.  When your unit has a clear shot at an opponent, you have the option of issuing an Attack command and then choosing a combat token with which to attack.  A notification is sent to your opponent, giving him/her a chance to choose a combat token with a defense value.  The game evaluates the attacker's selected token and character stats, the defender's selected token and character stats, and then tells the players how the attack turned out -- how much damage was done, what factors were used in the calculation, etc.

What's all this talk about "tokens"?
When a player issues an action command on his/her turn, the action depends on resources in the player's inventory.  The resources are in the form of tokens -- small, hexagonal chips that are used up when the player selects them.  There are Combat Tokens which have both attack and defense values and can be used for either purpose, Power Tokens which can only attack or defend but also come with additional effects, Heal Tokens which can be used to restore hit points to units who have taken damage, and Grenade Tokens which can only be used for attacking, do radial damage, have no defensive value, and cannot be blocked.

Will it be multiplayer?
Absolutely.  It was really designed to be multiplayer.  The alpha version is focusing on single player mode, but there is extensive support already in place for LAN-based multiplayer mode.

Can a Trooper be promoted to an Officer?
Not exactly.  You can, however, retire a trooper, sell off their equipment, and use the money to recruit an officer.

Is it a browser game?
Not yet, but I would very much like to port it to a browser-based version.  I am not committing to this yet, but I do like the idea.  A feasibility study will be necessary before this decision can be made.

Can you play it on Facebook?
No, because it doesn't yet have a browser-based interface.  See the previous question.

Will there be a mobile version?
Probably not.  On one hand, the mouse-driven interface would translate well to a touch screen.  On the other hand, it would be a significant effort to port the code, and the interface may be too detailed for the small screen.


Posted by Michael Henson at 5:26 PM No comments:

Email ThisBlogThis!Share to TwitterShare to FacebookShare to Pinterest
Labels: faq

The token inventory screen is working beautifully, though it isn't 100% finished yet.  Here it is:


As you can see, it differs a little bit from the mocked-up prototype I posted in my last entry (Designing the Token Display).  But the differences are better, in my opinion.  I like the final design far better than my prototype.

The unit type buttons across the top let you select the character class for whom you'd like to see the inventory. Below that you see the selected unit type and how many Heal Tokens they have.  Next you see a label showing whether offensive or defensive tokens are selected for viewing, along with the buttons that allow the player to make that selection.  Then you have the combat-oriented tokens.  At the bottom is a scrolling marquee that provides information about the token or button that the mouse is currently hovering over.

There are only two things missing:

I've gone back and forth on this design for months, sketching layouts, making changes, considering trade-offs, and refusing to settle until I felt that the design was "just right". Well, I think I have a design that's "just right" now.

Below is a rough mock-up of what I have in mind.


The three buttons at the top will allow the user to choose the unit type for whom he/she wishes to view the inventory of tokens.  For example, if the Captain button is clicked, the captain's tokens will be displayed.

Just below the buttons are the counts of how many Heal Tokens and Grenade Tokens are in this unit type's inventory.  Only Troopers have grenades, so this value should always be 0 for Captains and Officers.

So this is my plan. Hopefully by the end of the month we'll see it in action...and see how closely the final product ends up matching this low-fidelity prototype.

Posted by Michael Henson at 2:06 AM 4 comments:


I haven't done a proper progress report since August, but that doesn't mean there's been no progress.  On the contrary, some great things have happened in that span, which can be seen in other posts that I've made in the meantime.

Click here to check out
The Indie Video Game Developers Association!
Posted by Michael Henson at 4:54 PM No comments:

Remember that episode of Futurama where Professor Farnsworth was going to build a Smell-O-Scope and then remembered that he had already built one? That happens to Professor Henson (me) too.


I was looking over the code I fixed yesterday and thinking about what was to come next, and I discovered that I had already put in place some code to support the things on yesterday's list.  Specifically...

I'll probably do a full progress report this weekend. It's been awhile since I've gone all out like that.

Posted by Michael Henson at 7:36 PM No comments:

Four Days Late -- Could Be Worse

The refactoring was a success!  I'm four days past the goal date I set for myself, but that's OK. I've missed deadlines by significantly wider margins than this!

At this point, everything that was working before the refactoring began is working once again.  (Disclaimer: I haven't tested multiplayer mode yet.)  A few things in the interface are a bit clunkier now that I've cut down on the multithreading, but they're functional and it may just be a matter of optimization to smooth them out again.


So, after this little two-week diversion, what's next on the project plan?  It's a lofty goal, but I would like to accomplish the following tasks in January.  Listed in order of priority:

Once those are accomplished, I'd like to dive right in to the remaining turn-based parts of the combat system, but that'll be another phase.

May my optimism be warranted!

Posted by Michael Henson at 11:09 PM No comments:

I sincerely wanted to post on New Year's Day and say that I had accomplished my goal of having the network code completely refactored by that deadline.  But alas, it was not to be.  I was close -- so very close -- but there were a few bugs hanging around that I couldn't ignore, so I couldn't call it done just yet. My progress reports may occasionally be disappointing, but they're always honest!

Things are in a much better state now, but there is still just one bug remaining.  Let me explain.

The test procedure I used a couple of weeks ago (see Testing the New Client/Server Arrangement) is now completely successful and seems to be reliable. (Five consecutive successful tests!)  So I moved on to the next test, which was like the last one with a couple of modifications:


The results: All character upgrades work correctly 100%, but the additional AI players don't have any characters on their team.

Thus, today's challenge is straightforward: troubleshoot the additional AI players.  Gonna get to that right after a lunch break.

Posted by Michael Henson at 1:40 PM No comments: