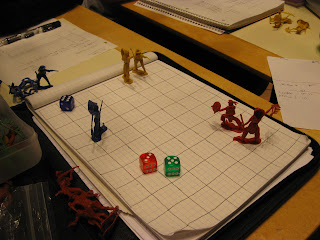 Near the beginning of the project, the art team and I met at the food court at Stratford Square Mall to discuss the core game mechanics and play through a simplified tabletop prototype.  Personally, I think it was a great idea that really gave a clearer picture of the level of detail that the game server was going to be dealing with.

Really, this was an easy, inexpensive, and valuable design and communication tool.  The "characters" were from a bag of plastic cowboys and indians from Dollar Tree, the dice were from a ten-pack of colored dice from Dollar Tree, the graph paper and pens cost just a few bucks from Target, the cards were some of my free swag from the 2009 Game Developers Conference in San Francisco, the scratch paper was old printouts from projects past, and I carried it all (except the paper) in a cheap plastic pencil box from Wal-Mart. 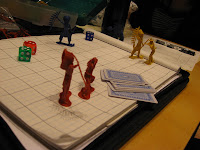 The graph paper represents a medium-sized game board.  The dice were used to simulate the random chance factors involved in every movement and combat interaction, the cards represented combat tokens, and the scratch paper served as the data model and the "pro shop" (a.k.a. the team configuration screen).

Things that were not represented in the paper prototype include gender bonuses, training levels, Power Tokens, random events, and destructible barricades and containers.
Posted by Michael Henson at 2:28 PM