What a week it has been!  I found a couple of potential voice artists, got a critical new screen working, added a new font to the engine, had a fantastic meeting with the art team, and most important of all, Team Laser Combat has been tentatively approved for use as my masters degree capstone project!  That's a serious boost in the project's chances of success. 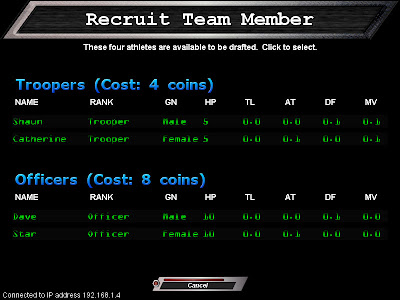 Posted by Michael Henson at 9:30 PM No comments:


Things we covered from the agenda:


Things we covered that were not on the agenda:

Things from the agenda that we did not cover:

Posted by Michael Henson at 6:30 PM No comments:

Final exam week is always crazy for everyone.  To top it off, I got deathly ill early Friday morning, and so far, the condition has stuck tight into Saturday evening.  (Yeah, I feel awful right now.)  Surprisingly, despite all of that, the week wasn't a complete loss for Team Laser Combat.  Far from it.

For the first time in over two weeks, I finally did some things that are exclusively for the purpose of this project.  Not only that, but this may be the longest list of accomplishments this project has ever seen in a single week.  Time-wise, this amounts to about two days' work.  I guess I've just been in the zone!  This has been a week of hyper-productivity in general -- with grading, grad school projects, TLC, and beyond.

The screen shot below shows my current challenge.  Captain April of the Spiders team is showing up on my list just like she should be.  Phantom, however, is the Captain of the Cats team, and should not be on my screen.  Fixing this is my next top priority. 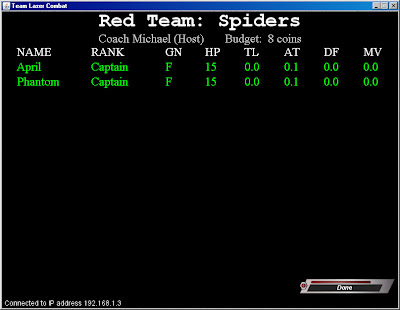 Posted by Michael Henson at 11:44 PM No comments:

As expected, my grad school project did indeed block any work dedicated to TLC.  Nevertheless, my school project (Invaders, Possibly From Space) did encourage a few changes to the MHFramework engine.  Since all changes to the engine affect TLC as well, I'm going to claim them as accomplishments.  Who's going to argue?

One major TLC-related accomplishment was made, however.  Check out this screen shot.  This, my friends, is a real-time, fully customizable, well-optimized, versatile fire effect provided my brand new MHFireEmitter class!  (Part of my new MHParticleSystem set.)  Now when a player destroys a destructible container in the game, it can burn for a while before revealing the item inside.

Until this week, I was firmly convinced that the only way to make real progress on this project was to have a large, contiguous block of hours.  While I'm still convinced that long, uninterrupted time is the ideal scenario, I've accomplished quite a bit this week just working a few minutes at a time throughout the whole week. Lesson learned:  Take what you can get and make the best of it!

There is some troubling news on the horizon, however.  My grad school class requires me to complete two games in the next month and a half.  It's likely that TLC will be put on hold.  I sincerely hope I can keep things moving in spite of the opposition.

Posted by Michael Henson at 10:33 PM No comments:

Graphical Fonts Are Back!

Graphical font capability has once again returned to MHFramework.  This benefits not only TLC, but potentially every future project.  To test the system, I created a custom font using characters from the old NES system font.

Posted by Michael Henson at 11:44 AM No comments: