It feels so good to have the actual gameplay elements underway!  The first interactive HUD elements are in place and functional, and the spawn point markers are being successfully processed.
Accomplishments:
Known Issues:
Next Steps:
High Priority:
Medium Priority:
Low Priority:
Posted by Michael Henson at 12:04 PM No comments:

Now I can get down to business.  :)  It first appeared as though regression were going to be the theme of the week.  Much of the existing functionality was destroyed and then restored in the name of progress.  Was it worth it?  YES!  Old bugs were fixed, reliability of existing functionality was bolstered, the overall testability of the software was greatly enhanced, and the way is being paved for some fun and somewhat sophisticated artificially intelligent computer opponents.

As of this writing, those computer opponents are giving me a whole heap o' trouble, but I'll conquer 'em.  It's just a matter of time...

Posted by Michael Henson at 1:40 PM No comments:

This week's accomplishments were not numerous, but they were of vital importance.  The project is in a new phase now where the focus has shifted to game play initialization, which involves fairly significant effort in the user interface, the network client modules, and most of all, the game server. 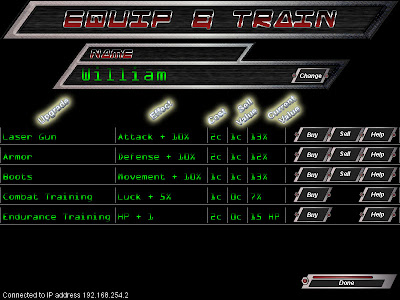