The slim chance of finishing my degree earlier than anticipated has raised the priority of reaching the alpha stage on this project, so I've been forcing it into any free moment I can find lately!

Yes!  My AI players are now taking turns correctly.  They're finally playing nice with one another like good little boys and girls.  My proposed hypothesis was correct -- the necessary code wasn't being invoked by the proper message handlers.

Thank you and goodnight!

Posted by Michael Henson at 12:42 AM No comments:

About those two bugs I mentioned...


In my previous post, I mentioned that there were two known issues remaining in the turn-based functionality.  In the interest of honesty, disclosure, and bug tracking, I thought it might be a good idea if I actually record what those issues are.  So here ya go.

First and most importantly, the server fails to advance to the next player once a player has finished his/her turn.  There is no workaround, but I do have an idea about what's causing it: the location of the functionality.  I think I put it in the message handler for the CHARACTER_MOVE message, but I don't think that message is actually being used.

Second, the Actions menu has a bug where you can only move a character one time.  If you try to move again, the character ignores your command.  There is an easy workaround for the time being:  If you click the Test button on the HUD, it resets the menu and your character can move again.  The solution to this problem is most likely in the initialization of the menu, which would explain why resetting the menu fixes the problem.

Posted by Michael Henson at 11:17 PM No comments:

Looking to the Horizon

I'm getting pretty close to fixing all the bugs with character movement and taking turns (there are just two known issues remaining), so it seems like a good time to lift my head, look around, get the lay of the land, and see where I'm headed next.  Here's the plan for the near future as I see it right now. 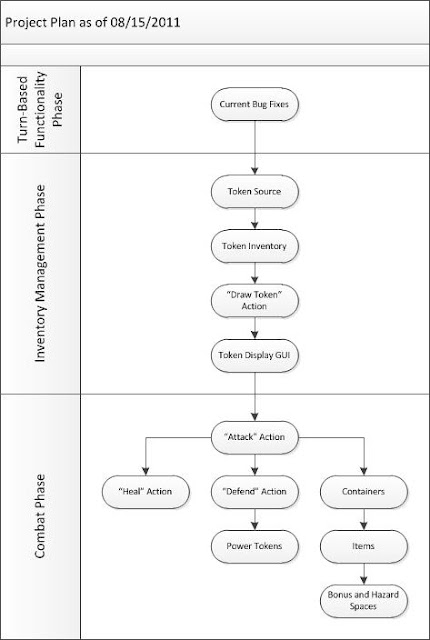 Posted by Michael Henson at 5:06 PM No comments:

The problem apparently had something to do with static vs. non-static variables.  When I made the "whose turn" value static, the problem went away, implying that perhaps the current player's data was not being updated when it should have been.


This has led me to the next bug:  Action points are not being deducted when characters move.  Ah, a fresh new challenge!  Yay!

Posted by Michael Henson at 11:41 PM No comments:

The proposition I made in my last post was indeed correct -- the AI players are not receiving the notification that the program has transitioned from the lobby state to the game state.  The question of "why" still remains.

Just wait.  I'll figure this out.  Eventually.
Posted by Michael Henson at 11:52 PM No comments:

The "Whose Turn" Bug -- Update

My last test showed that the method in question isn't even getting called.  This means that I must turn my attention to a higher level and find out what could be prohibiting this condition from being evaluated.  The most likely candidate is that the AI players are not being notified that the server has transitioned into game state and the game has begun.

More to come after I get another chance to look at the code.  Who knows when that will be?
Posted by Michael Henson at 6:11 PM No comments: