Don't Get All GUI On Me

It's been pointed out that the client-side class diagram that I posted last night doesn't include anything for the user interface.  I have two things to say about that.

First, it was intentional. If you look at the project plan that I posted about a month ago, you see that "Token Source" and "Token Inventory" come before "Draw Token Action" and "Token Display GUI".  The Token Source is handled by the server, and the Token Inventory resides on the client.  The next two steps require user interaction, but the back-end support needs to be there first.

Second, it's not entirely true.  The diagram shows that TLCToken inherits from MHActor, which promotes and simplifies the rendering of animated graphics in the engine.  Also, the diagram mentions methods like sortByAttackValue() and sortByDefenseValue(), which will provide sorted lists to be displayed and selected from in the Attack command and the Defend interface.  The properties of the token stacks are also values that will appear on the token inventory display.  So there's a lot of stuff that will support the UI, even if it's not explicitly represented in this diagram.

Satisfied?  Is everybody happy now?  :)

Posted by Michael Henson at 2:51 PM No comments:

The Client's View of the Token System

As promised earlier, here is a fairly high-level view of the client side of the token system.  You may notice some classes in common with the server side.  Code reuse is just good software engineering, of course.  :) 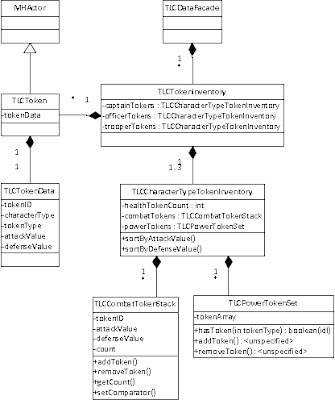 Posted by Michael Henson at 9:18 PM No comments:

The Server's View of the Token System

The process of implementing the token system has begun!  The core gameplay revolves around random chance factors combined with how the player uses the resources that his/her team has available.  These resources come in the form of tokens -- combat tokens, heal tokens, power tokens, and grenade tokens.

Here's the class diagram of the system's server-side components.  I will follow up later with the client side. 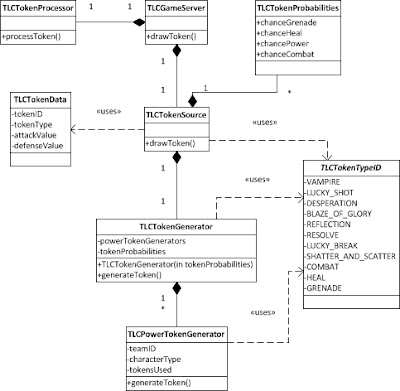 Posted by Michael Henson at 2:04 PM No comments:

It's never too early to start a project's postmortem, and I've had a lot of thoughts floating around in my head of things I really want to remember for my next project.  I think I can keep these thoughts from becoming regrets if I record them and learn from them, so here's my first list of lessons learned in this project.

This is not to say that the project is over, of course.  It's far from it.  I just don't want to lose these valuable lessons in the meantime.

There are sure to be more to come.  I know this doesn't cover them all!

Posted by Michael Henson at 10:30 PM No comments: